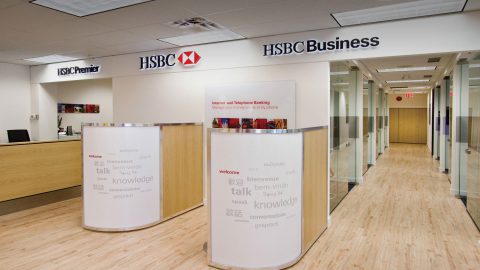 The tenant improvement to this branch brightened and revitalized the space while updating it to current HSBC Global Standards.

The HSBC Kelowna Bernard branch is located in the historic heart
of Kelowna, BC. The tenant improvement to this branch brightened and revitalized the space while updating it to current HSBC Global Standards. Due to budget limitations, numerous existing elements were retained. Much of the millwork was restored and refinished, while inflexible items such as the vault, night deposit, and ATM room remained in place. The majority of the existing ceiling was preserved as well. Working around these components, the remainder of the space received a new and improved layout. As demolition progressed, issues with the existing building were brought to light. Fire separations had large penetrations, and various fixtures were not adequately braced. Any items that were not up to current codes were rectified, creating a safe, operational, and updated working environment. As a result of the branch’s operational requirements, construction was completed in several phases. The branch had full operation throughout the course of the project. Mid-way through the project, ZAS was informed that a new tenant would be moving into the second floor, resulting in the need for security and separation between the two spaces. This was a challenge in some areas due to the unusual connection of what had been formerly two separate buildings. Despite the challenge, ZAS successfully delivered the project achieving all client objectives.