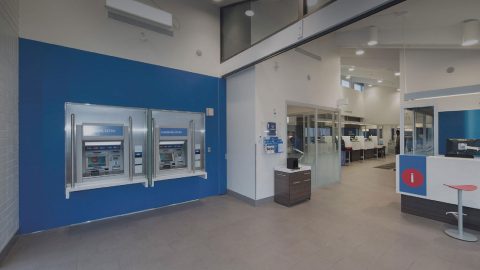 The end result is a crisp, bright Banking Hall surrounded by glazed offices with much improved air and temperature control throughout.

ZAS Architects + Interiors were retained by Bank of Montreal to renovate an existing branch in Victoria, BC. This is one of BMO’s busiest retail branches in Victoria, located not far from the University of Victoria, consequently requiring careful, phased coordination of construction to ensure continuous operation. ZAS sought to freshen & highlight a dramatic double-height Banking Hall with existing exposed beams and a long, sloped ceiling. The base building was originally built in the 1970s and renovated most recently in 2003 / 2004. Unfortunately, the age of the building suggested hidden hazardous construction materials, investigated per BMO policy and identified with the help of a Hazardous Materials Identification & Remediation Consultant. As construction progressed, the scope of abatement work was expanded and refined to balance protection of staff, clients and construction workers, cost and constructability. ZAS has a preference for not leaving known, hidden hazardous construction materials that may be accidentally re-discovered by a maintenance team or future Architect / Contractor while responsibly managing the scope of work to keep the project within budget. Implementation of new ASHRAE standards required installation of new room controllers and new controlled receptacles for the first time in this project. The end result is a crisp, bright Banking Hall surrounded by glazed offices with much improved air and temperature control throughout.