Representing Ontario’s best emerging new talent and some of the province’s most established architecture firms, River City Phases 1 and 2 is one of 10 projects that have been recognized with the prestigious Design Excellence Award this year.

The Design Excellence Award winners were selected from more than 140 submissions. The 20 finalists were judged on a number of criteria, including creativity, context, sustainability, good design/good business and legacy.

Representing the first residential neighborhood within Toronto’s West Don Lands, River City stands as a striking marriage of sleek aesthetics and sustainable design. It brings a unique and bold response to a brownfield, post-industrial site that stretches along the Don River.

Comprised of four city blocks, this new neighbourhood will ultimately create 1000 residential units in what has become a green and sustainable community. It is a reconstructed neighbourhood where pedestrian friendly streets, exceptional parks and public spaces are linked with an architecture inspired by flow, movement and continuity. It’s not uncommon to hear references to River City Phase 1 & 2 as the most unique and most diverse multiunit residential architecture in Toronto.

The new residential units comprise of townhouses, lofts, and condominium units in buildings ranging from five storey and upwards. River City Phase 1 is a darkly beautiful structure with a modern sensibility, and a nod to the industrial nature of the area’s past. As a dramatic contrast to the edgy, dark exteriors of Phase 1, the sleek white design of Phase 2 stands as a luminescent jewel against the industrial feel of the buildings surrounding it.

The expanses of smoke tinted glass in dark aluminum frames, the balanced opacity and transparency of the facades, the hard geometry of the buildings—all help ease River City into its expressway bound neighbourhood, and give it aesthetic unity. Spanning from King Street East to Corktown Common Park, and from the Don River to River Street, this project represents the first two stages of the carefully planned West Don Lands neighbourhood and waterfront redevelopment initiative. 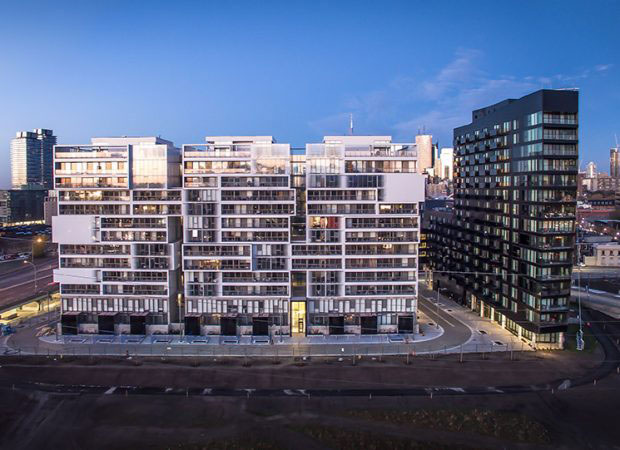